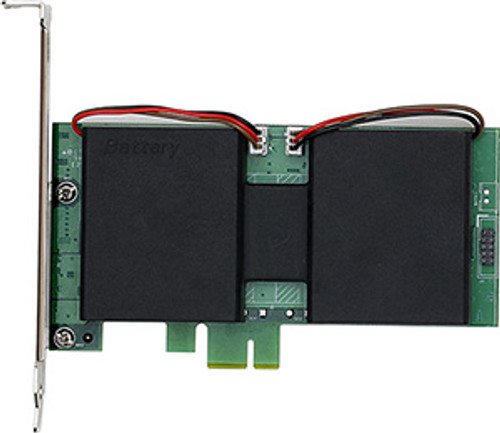 PRODUCT DESCRIPTION
The ARC-1883-BAT features NAND flash memory and battery technology that work together to save cached data in the event of system power loss. When the module detects loss of power, the battery keeps critical parts of the ARC-1883 RAID controller active to allow data to be copied from the on-board controller cache to the flash memory. Once the data has been copied, the flash memory can store it for years without power. When power is returned to the RAID adapter, the data in the flash memory is copied back to the onboard adapter cache and operation resumes as normal with all outstanding I/O requests intact. A fully-charged BBU can preserve data for up to 72 hours during a power loss before the battery power depletes.

The FBM backup capacity is defined as the maximum duration of a power failure for which data in the cache memory can be written into the flash on ARC-1883-BAT. The ARC-1883-BAT can support up to 8GB cache memory that installed on the 12Gb/s SAS RAID controller.

Areca ARC-1883-CAP (Flash Based Back Up Module)

Areca ARC-1883-CAP (Flash Based Back Up Module)